We all know by now that the name BMW stands for driving pleasure. But what is this acronym actually short for? And how did the BMW name come about? Let’s dive in and read a bit more about the history of this much loved car!

Today’s BMW has its origin in Rapp-Motorenwerke GmbH, which began producing aircraft engines in 1913. During the First World War, Rapp supplied the air force of the German Empire. At that time, automobiles had not yet broken through into the mainstream. All long distances travel on land could only be done by train. 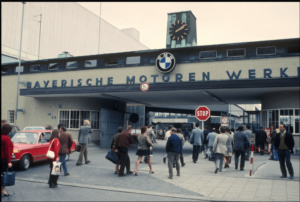 WE HAVE A CAR FOR YOU

Are you ready to buy your next car that you will love and Enjoy? Pels Auto Might Just Have The Perfect One For You!

CHECK OUT OUT LATEST ARRIVALS

What Does the “BMW” Acronym Stand For

The acronym BMW stands for Bayerische Motoren Werke GmbH, which roughly translates to the Bavarian Engine Works Company. The name harks back to the company’s origin in the German state of Bavaria. It also indicates BMW’s original product range: engines for various applications.

A Quick Summary Of How It All Started

The corporate headquarters and parent plant of the BMW Group are still located at the former BFW site in Milbertshofen, Munich to this day.

Rapp Motorenwerke had its headquarters in the Bavarian capital, Munich. When the company went bankrupt in 1916, it became Bayerische Flugzeugwerke AG (BFW). Shortly afterwards, in 1917 , Rapp changed its company name to Bayerische Motoren Werke GmbH.

But Then, the BMW name vanishes….

The end of the First World War brought a halt to the construction of aircraft engines. BMW shifted its focus to railway brakes and built-in motors. This was so successful that the Berlin-based brakes company Knorr-Bremse AG took majority ownership of BMW in 1920, integrated the company and relocated to Munich. Bayerische Motoren Werke GmbH as an independent company disappeared temporarily from the scene – albeit not for long.

Then BMW were Founded For The 2nd Time

In 1922, Camillo Castiglioni, the main shareholder of Knorr-Bremse AG , bought the BMW company name and took over engine construction operations, along with the employees, production facilities and company logo, and transferred everything to BFW, Bayerische Flugzeugwerke AG.

In the same year, the company moved into BFW’s factory buildings in Lerchenauer Strasse and changed its name to Bayerische Motoren Werke AG. And that’s how the BMW name found its way into the commercial register for a second time.

WELCOME TO OUR BLOG

Thank you for taking the time to visit our Blog.We hope that you enjoy reading the motoring tips and news we post.

Whether you’re heading to a dealership or buying from a private person,knowledge yourself...
No comments
It is always important for new and second hand car buyers to do...
No comments
When you are behind the steering wheel of a vehicle, you have a...
No comments
We use cookies on our website to give you the most relevant experience by remembering your preferences and repeat visits. By clicking “Accept All”, you consent to the use of ALL the cookies. However, you may "Reject All". By viewing this website you hereby acknowledge that you have read and accepted the Protection of Personal Information (POPI) disclaimer on the link provided.
Accept AllReject All Read More
Manage consent

This website uses cookies to improve your experience while you navigate through the website. Out of these, the cookies that are categorized as necessary are stored on your browser as they are essential for the working of basic functionalities of the website. We also use third-party cookies that help us analyze and understand how you use this website. These cookies will be stored in your browser only with your consent. You also have the option to opt-out of these cookies. But opting out of some of these cookies may affect your browsing experience.
Necessary Always Enabled
Necessary cookies are absolutely essential for the website to function properly. These cookies ensure basic functionalities and security features of the website, anonymously.
Functional
Functional cookies help to perform certain functionalities like sharing the content of the website on social media platforms, collect feedbacks, and other third-party features.
Performance
Performance cookies are used to understand and analyze the key performance indexes of the website which helps in delivering a better user experience for the visitors.
Analytics
Analytical cookies are used to understand how visitors interact with the website. These cookies help provide information on metrics the number of visitors, bounce rate, traffic source, etc.
Advertisement
Advertisement cookies are used to provide visitors with relevant ads and marketing campaigns. These cookies track visitors across websites and collect information to provide customized ads.
Others
Other uncategorized cookies are those that are being analyzed and have not been classified into a category as yet.
SAVE & ACCEPT
Compare